Madrid is one of Europe’s great cities. Situated right in the heart of Spain, the Spanish capital is a clean and attractive city with many wonderful treasures waiting to be discovered: 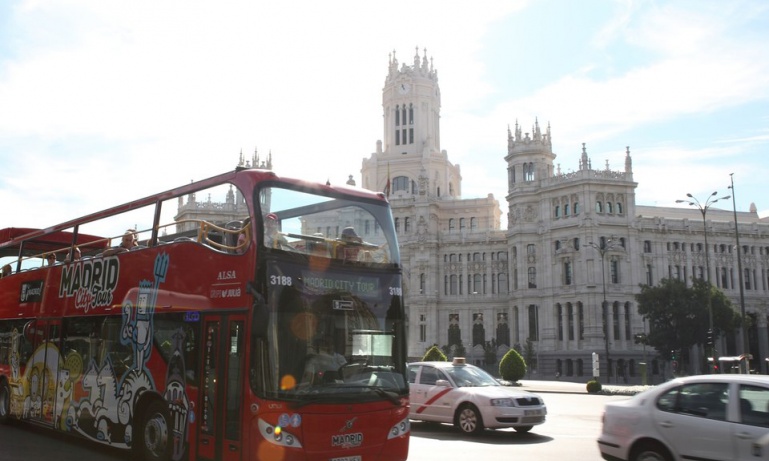 Start your visit to Madrid by taking the on the Hop-On-Hop-Off bus tour. This will help you get your bearings and get a general feel for the city.

There are 2 routes: the Green Route and the Blue Route. A full loop of the Blue Route takes approximately 80 minutes and focuses on the historic parts of the city. This route stops the Royal Palace, the Paseo del Prado and the Puerta de Alcalá, to name just a few. A loop of the Green Route takes about 65 minutes and focuses on the more modern parts of the city like the Salamanca neighbourhood and the Paseo de la Castellana.

One of Europe’s finest palaces and still the official residence of the Spanish Royal family (though rarely used now except on state occasions), the Royal Palace should be high on your list of things to do in Madrid. Tour its stunning eighteenth century interiors and spend some time in the highly interesting royal armoury and royal pharmacy. Lovely squares and gardens surround the city, namely the Plaza de Oriente, the Sabatini Gardens and the Campo del Moro.

Don’t just show up or you will face a long wait for tickets! Avoid the queues by pre-booking through us; skip the line for a quick entrance ticket and a 90 minute guided tour of the Royal Palace from €35 per person. Or for €44 per person get picked up at your hotel, enjoy a panoramic guided tour of central Madrid. Top that off with a guided walking tour of Hapsburg Madrid (historic centre) and entry to the Royal Palace.

Next door is to the Royal Palace is Madrid’s Cathedral, the Almudena Cathedral. It is not immediately apparent that there is a cathedral there at all, as it blends in so well with the other buildings in the palace complex. It is a very young cathedral, only opening in 1993, having taken 110 years to complete.

THE GOLDEN TRIANGLE OF ART

The Prado museum, the Reina Sofia museum and the Thyssen-Bornemisza museum together form what is known as Madrid’s Golden Triangle of Art. Combined entrance and a guided tour of all three sites costs from €75 per person and takes a full day. 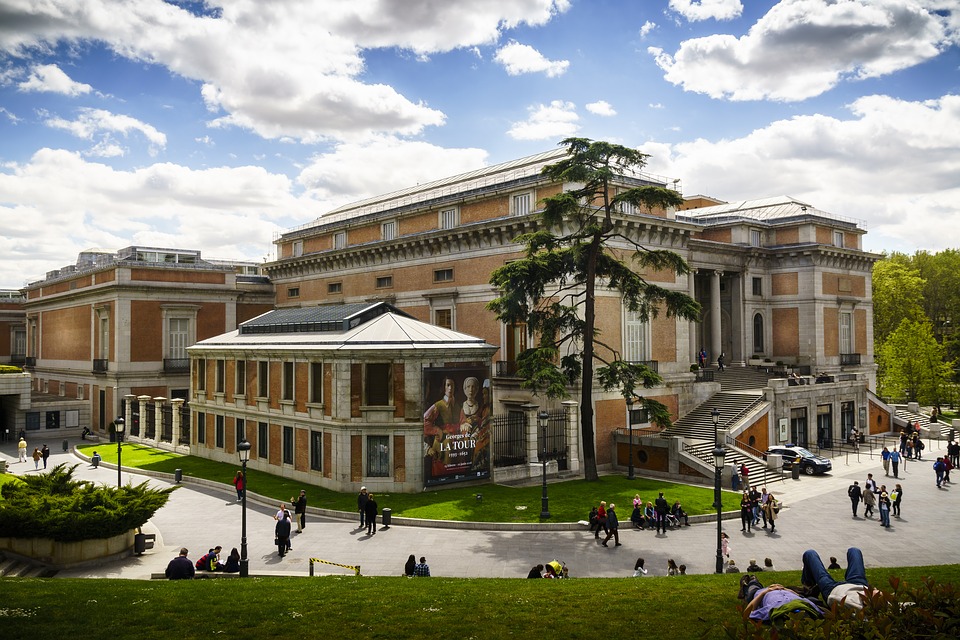 European art from the 12th-19th centuries is housed there, with a particular focus on Spanish art from the 16th-17th centuries. This is another place to pre-book tickets for, a testament to the popularity it is currently enjoying!

From €55 per person, you’ll get picked up at your hotel, enjoy a panoramic guided tour of central Madrid, a guided walking tour of Hapsburg Madrid (historic centre) and entry to the Prado. Or if you’re short on time, take our skip the line entrance to the Prado which costs from €40 per person.

The private collection of Heinrich Thyssen-Bornemisza and his son Hans Heinrich is on display here. It covers all periods of art, from the Renaissance to Pop Art.

General admission is from €14 per person, or for €26 per person you’ll get a 2 hour guided tour. 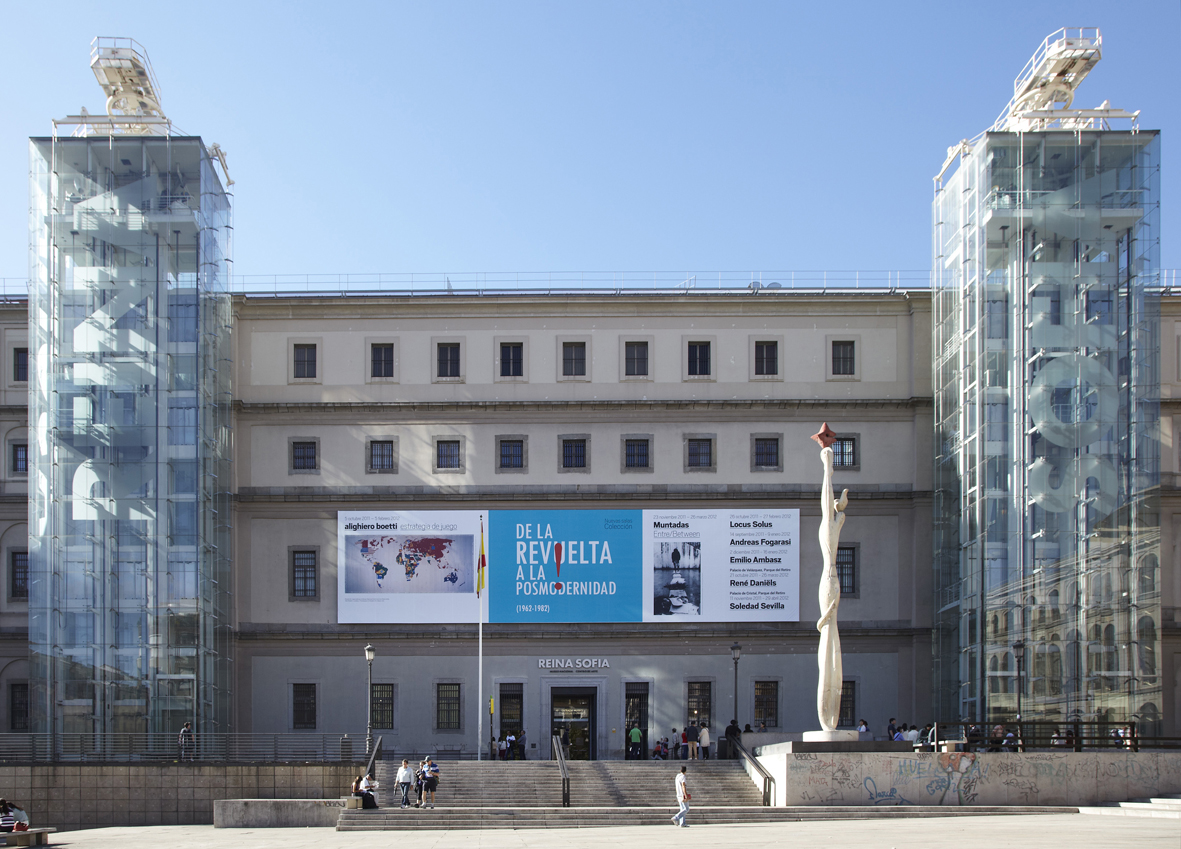 This is Madrid’s modern art museum, including works by Pablo Picasso and Salvador Dalí.

A 65 minute guided tour costs from €24 per person. 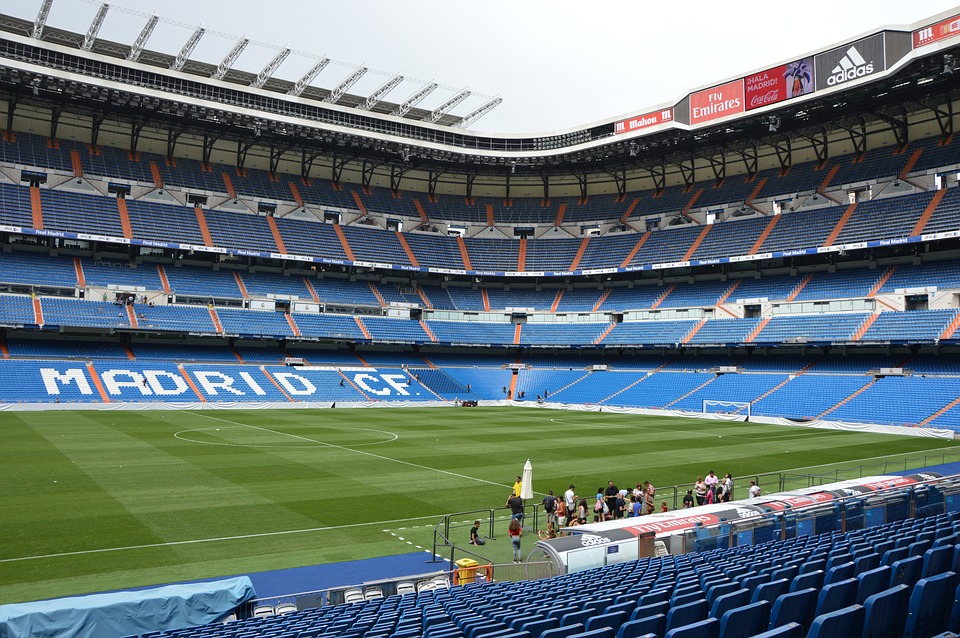 Home of Real Madrid’s football team, this is hallowed ground for fans of the team which was recently named FIFA’s Team of the Century. Take the fascinating self-guided stadium tour which includes a chance to explore the changing rooms. You can also walk along the players’ tunnel to the pitch. Enjoy views of the stadium from ground level and then climb to the highest part of the ground for panoramic views of the 81,000-seater stadium. You will also get see the Press Room and Presidential Box. To finish your tour board the virtual team bus and see the club's hugely impressive trophy room.

We have match tickets for sale for their home games (from €125 per person) and we offer 2 night match packages (from €249 per person). We also sell tickets for the self-guided stadium tour (from €26 per adult and €19 per child). 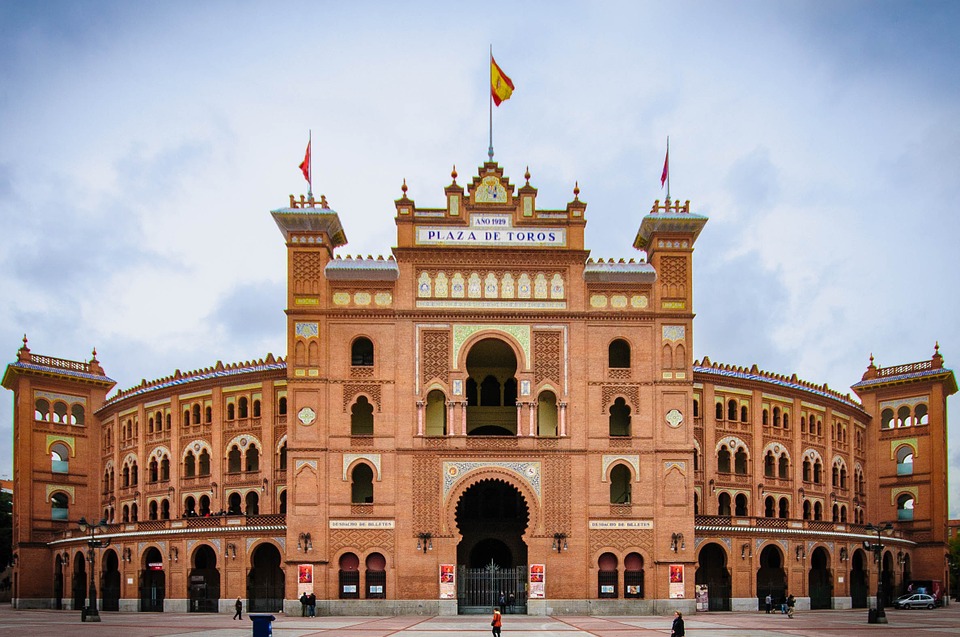 Love it or loathe it, bullfighting is deeply engrained in the Spanish psyche. It is hard for non-Spaniards to see the appeal of this controversial sport. The on-site museum tries to shed some light on its popularity. In doing so, offers an important perspective on Spain and its people. The bullring itself (which I’ll grudgingly admit is a beautiful building) can seat almost 24,000 spectators. It one of the largest plazas de toros in the world. For all the pomp and showmanship that surrounds this sport, the fact that there is a hospital and two operating theatres on-site is testament to just how dangerous it really is…

Buen Retiro means “pleasant retreat” and that’s exactly what this place is. Take a boat out on the lake, or take a walk through some of the 350 acres of parkland which are dotted with statues and sculptures. Lunch under the shade of a tree, take in a free concert (Sundays at midday May-October) or take the kids to the playground. It’s a fabulous place to escape the bustle of the city!

You don't expect to stumble upon an ancient Egyptian temple while in Madrid! The Temple of Debod was a gift to the Spanish people by the Egyptian government to save it from being flooded when the Aswan Dam was being constructed. The temple was dismantled in Egypt, transported to Spain and then reconstructed piece-by-piece on site in Madrid! Visiting the interior of the temple is restricted at times, but there is a lovely park which surrounds the temple which makes the perfect place from which to watch the sun setting over the city.

Admission to the park is free.

Segovia, a World Heritage City makes a lovely day trip from Madrid. The high speed “Ave” train takes you the 60km from Madrid’s Chamartín train station to Segovia in just 30 minutes. It reaches a top speed of 250km/hour en route. This is a fun way to travel! (Note: the Ave train station is about 10 minutes outside Segovia but there is a bus waiting to meet each arriving train. There is a normal train service too which takes about 1h50m depending on the number of stops. This train arrives directly into Segovia). 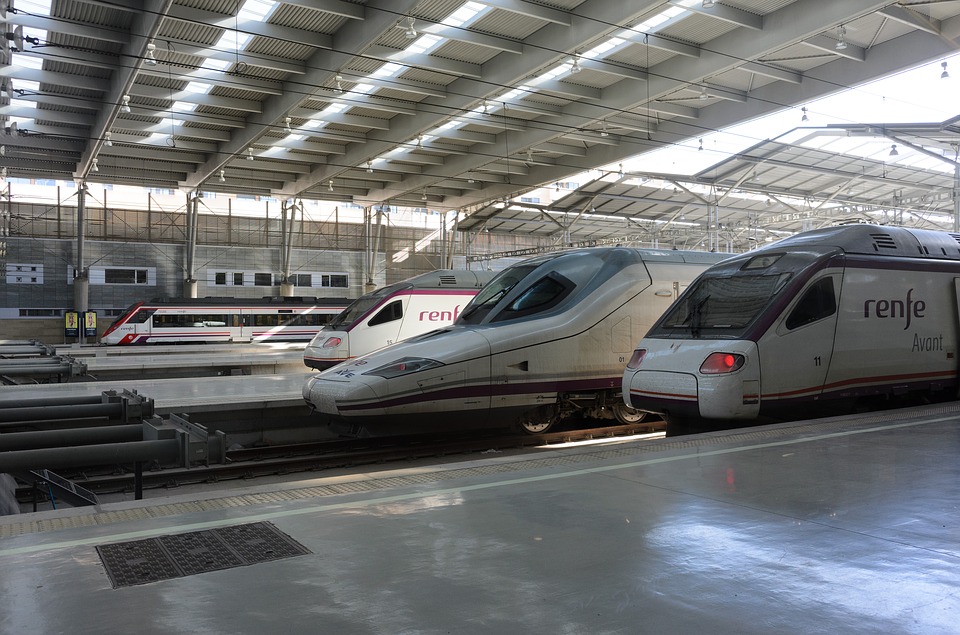 Segovia is dominated by an impressive aqueduct which dates back to Roman times and which served the city until the 19th century. Each un-mortared block that comprises the 14km long aqueduct weighs about 2 tonnes - it was a marvellous feat of engineering in its day! 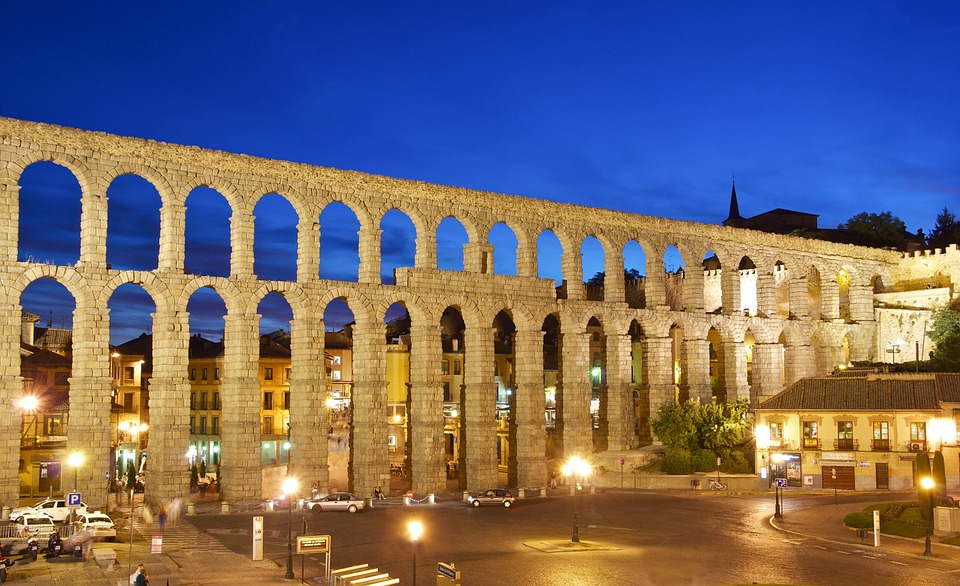 The city is hilly so wear comfortable footwear. It is a lovely place to walk around. From the aqueduct, amble through the winding streets to the Plaza Mayor, or main square, and soak up the atmosphere there. Then on to the cathedral which dominates the skyline. 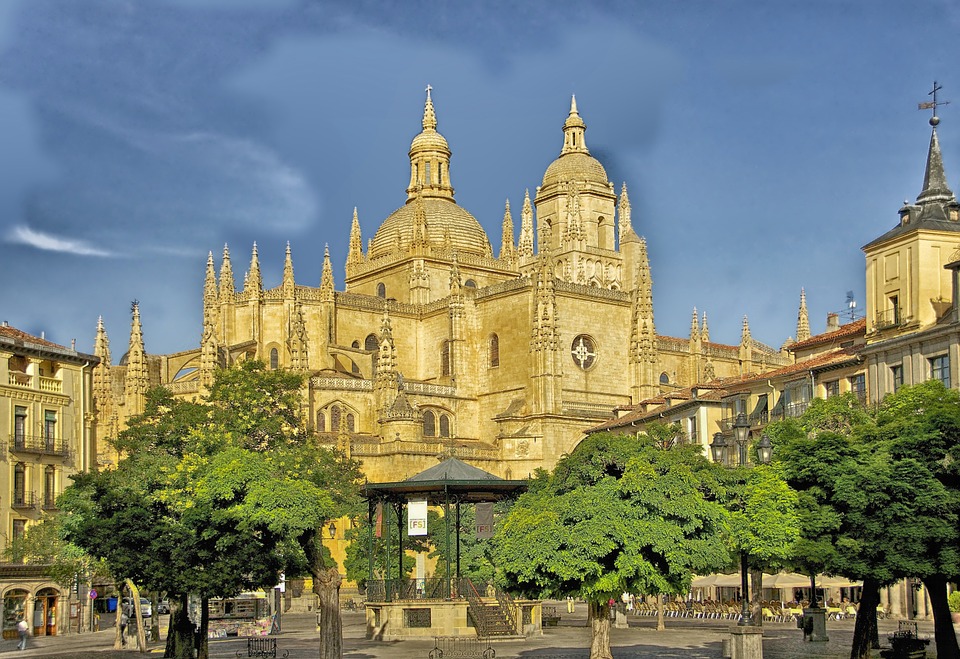 From there it’s a short walk to the impressive Alcazár, or royal castle. In addition to visiting the interior of the castle, you can climb the tower’s 152 steps to get a lovely vantage point out over the city. This is a lovely way to round off your time in the city.

Some notable restaurants in Madrid

In its prime location right next to El Retiro park, this restaurant offers German cuisine in a German atmosphere, with a classical decoration, inspired in the second half of the 20th century. Horcher is one of Madrid’s classics, its prestige attained by founder Otto Horcher, who established this restaurant as one of the most luxurious and exclusive in the capital. Some of their specialties date from 1943, especially game dishes, such as the hare, the roasted quails or the hamburgers made with minced beef sirloin and veal.

This is one of the most emblematic, award winning and prestigious restaurants in Madrid. Its menu includes both traditional and modern dishes, but all of them rigorously and carefully prepared. It offers seasonal cuisine, exquisite presentation and an excellent service. Tie and jacket are required for gentlemen!

Frequented by celebrities, this is the most prestigious restaurant in the Las Vistillas area. The signature dish: the fried eggs with ham on a bed of potatoes (huevos rotos sobre patatas). El Landó also serves delicious Madrid-style callos (tripe), included in a menu where international Castilian cuisine is predominant, but leaves plenty of room for others.

Situated in the centre of Madrid beside the Plaza Mayor. The building dates back to the mystical Knights Templar which the décor and menu are modern chic.

Beyond their appetizing menu, Café de Oriente is unique for other reasons: it is located in the vaulted basement of a 17th-century building. At Café de Oriente one can savour elaborate creative cuisine dishes in a candle-lit atmosphere while enjoying their attractive views, since it stands opposite the Royal Palace and the square after which it is named. And there is also much to see underneath it, namely under the Aljibe room, where a transparent floor showcases the former wall of Madrid. The menu features avant-garde cuisine which is still respectful of traditions and determined by seasonal produce.

Founded in 1839 by Emilio Huguenin, a Frenchman of Swiss origin, this was the first modern restaurant in Madrid. Its dining rooms, decorated in the highly-elegant bourgeois style typical of the late 19th century. Its menu is an example of international haute cuisine, with such appetizing dishes as pheasant in grape juice, partridge stew with French onions, Austrian-style fallow deer and a sublime dessert, the surprise soufflé.

The most traditional Basque cuisine can be found in this restaurant. Inaugurated in the 70s, Mesón Txistu is the place for those who enjoy good, old-fashioned eating. The interior features a cosy and intimate atmosphere, with a classical decor and photos of celebrities who have visited it, especially soccer players.

Its location allows for a varied clientele ranging from executives coming from the nearby business district in Azca to families or couples on the weekends. The one thing that never changes in La Dorada is their exquisite selection of fish and seafood, which they prepare following the secrets of the wise Andalusian cuisine which makes their menu unique, to which they add the daily suggestions.

A Spanish institution, serving local cuisine tucked away on a side street, but within a short walk of the Royal Palace. Family-owned and run. Reservations are recommended as this is a small restaurant.

For maps and other general information: