Rome makes a brilliant city break! The city is a living museum with treasures to discover around at every corner. This itinerary will help you make the most your time there, ensuring you get to see all the main sights in just 3 nights.

Everything mentioned below can be bought from us at Kanes Travel; just contact us for pricing.

Arriving in the Eternal City

As we only had 3 nights to spend in Rome, we decided to take the 06:25 flight from Dublin to maximise our time there. The flight takes about 3 hours and we arrived in Rome Ciampino airport nice and early at 10:30 local time (they are one hour ahead of us).

Ciampino airport is small and once we walked through the double doors of the arrivals hall our transfer driver was waiting to take us into the city. (Private transfers cost about €50 each way for 2 people).

The 30km journey from the airport to our hotel took about 40 minutes. There’s nothing quite like arriving in a new city - it’s so exciting and so full of possibilities and we were eager to get started!

The hotel we chose for our stay was the XX Settembre, a 3* hotel near Termini Station which is an area of the city with great value accommodation. Termini Station is where the airport buses stop if you’d prefer to use public transport to get into the city (costs €8 return). Three metro stations are also present in the vicinity which makes it an ideal base for sightseeing.

The hotel is about an 8-minute walk from Termini. We checked in and dropped off our suitcases and off we went to explore!

Before arriving in Rome, we had pre-booked a combination ticket which gave us 48 hours on the Hop-On-Hop-Off sightseeing bus. This also included skip-the-line entrance into the Vatican museums, the Sistine Chapel and the Colosseum as well as regular entrance into the Roman Forum.

At about €85 per person (depending on your dates) it is fantastic value for money. You ABSOLUTELY NEED to skip the line at these places if you don’t want to spend hours queueing, and who does when you’re only there for a short time…

We joined the Hop-On-Hop-Off bus at the nearest stop to our hotel (10 minute walk). The sightseeing bus is a great way to begin any city break as it gives you a feel for the size and layout of the city. The commentary is very informative and gives you an idea of the different landmarks and gives you an opportunity to earmark places to visit later on.

As we were tired after our early flight, we did both Line A and Line B consecutively which took a total of about 3 hours. It was an easy and lazy way of sightseeing...

It’s incredible to see Rome for the first time! The sheer volume of ancient and classical buildings everywhere is a sight to behold! Around one corner, the Colosseum looms in front of you and down another street you might spot the Spanish Steps or the Vatican! It’s a living museum of iconic treasures and you will not be disappointed! We rounded off the night at Scholars Lounge, an Irish pub close to Via Carvour which is one of the main bus tour stops.

As our hotel was on a side street, the rooms were quiet and we got a good night’s sleep. The room was compact but clean and the shower was good. Breakfast was continental so there was a choice of breads, cereals, cold meats, cheese, yoghurts, juices and tea/coffee. It wasn’t hugely substantial, but it got us started. At a rate of only about €50 per room per night (depending on time of year) I would definitely stay here again. 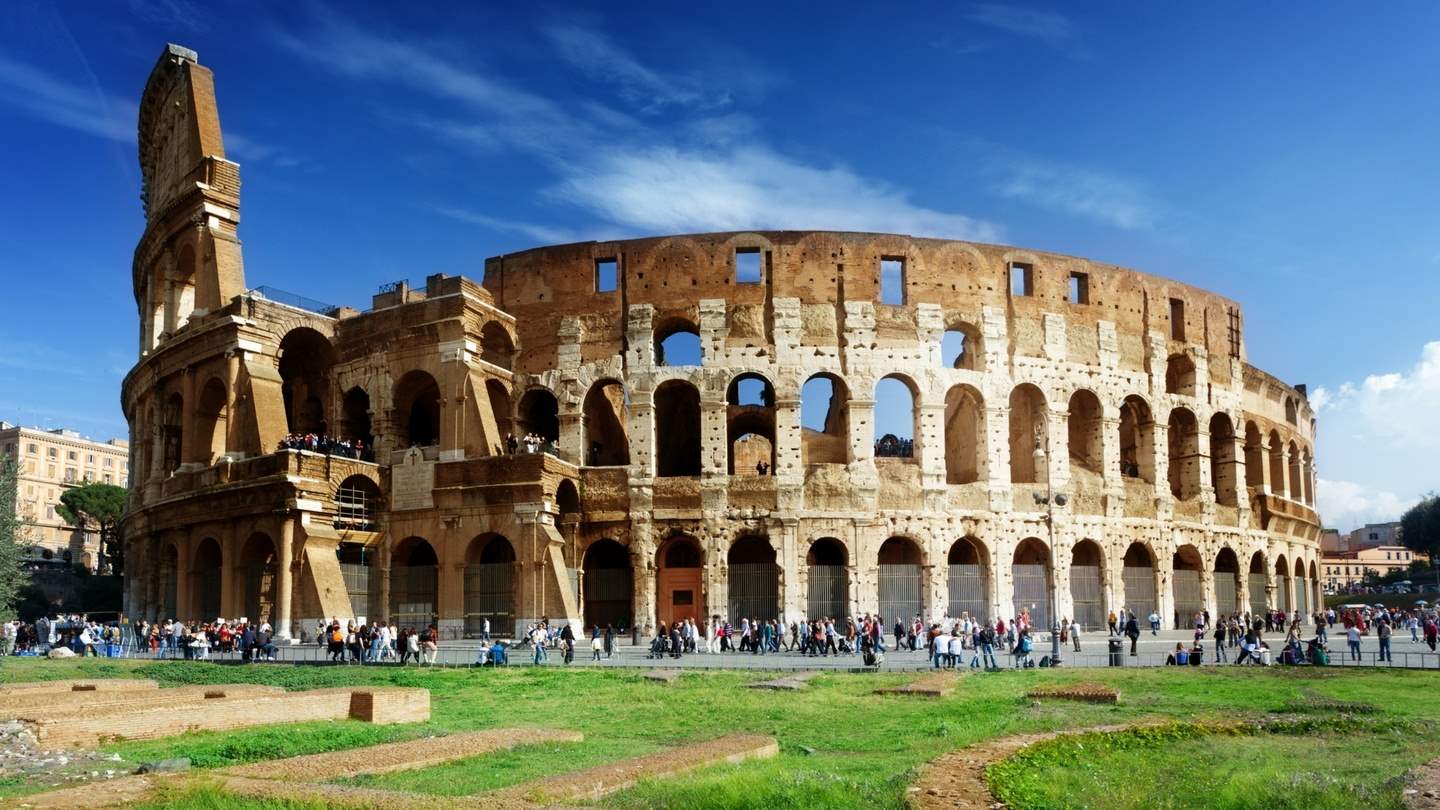 Please note that effective from 1st June 2018 due to a restriction imposed by the Colosseum the colosseum will now only allow customers entrance from 2pm onwards (previously 9am).

Our first port of call on day 2 was the Colosseum and we took the sightseeing bus there. We were so glad to have our skip-the-line tickets as the queues were quite long and it was handy to have the entrance prepaid. Outside the Colosseum, many tour guides touting for business were present and we joined a tour group which brought us around the Colosseum (and later around the Roman Forum).

This is a good idea as otherwise you are simply wandering around yourself and you probably won’t get much out of it. The Colosseum is something we have all heard about. This is largest amphitheatre in the world and is where Romans held battles between gladiators and wild animals.

This magificent piece of architecture was built in 80AD (now THAT’S old!) and it could seat up to 87,000 spectators – about the same capacity as Wembley Stadium! It was some feat of engineering in its day! The ravages of time and two powerful earthquakes mean it is no longer the structure it used to be but is a must-see when you are visiting Rome.

As of 1st November 2017, you can now visit the top level of the Colosseum. Back in the day, these were the nosebleed seats for the poor citizens. Today you get spectacular views of the city from up there. 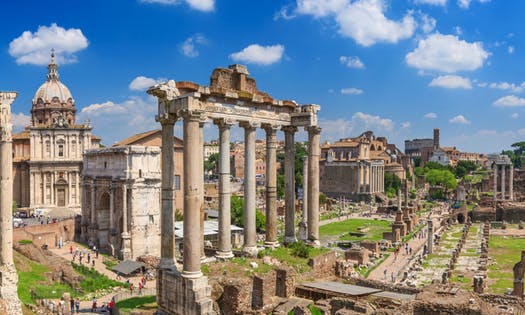 I have to admit that I knew nothing about the Roman Forum before I went to Rome. We only went there because it was included on our pre-booked ticket and because our guide was bringing us there.However, it really is the most incredible place! Our guide told us that parts of the Roman Forum or the “Foro Romano” date back more than TWO THOUSAND YEARS, to the time of Julius Caesar.

It is an eclectic space; the mixture of buildings span several centuries and it was the centre of religious, social and public life for over 1400 years.

It is massive too; you could wander around for it hours discovering the many basilicas, temples and public spaces which have been uncovered since excavations began in 1803. When I think back on my time in Rome, my mind’s eye is filled with images from here from nearby Circus Maximus, the ancient chariot racing stadium.

Close to Circus Maximus and worth a few minutes of your time is the “Bocca della Verità”, or the Mouth of Truth made famous by Audrey Hepburn in her film “Roman Holiday”. It is an ancient bearded face carved into a giant marble disc. Legend has it that if a liar puts their hand into the mouth, the Bocca will slam shut and bite your hand off.

Now hop back on the bus and head north to the Piazza Navona. A stroll through this elegant and lively square is worthwile, with beautiful contrasts and imagery on show. If you are visiting the city from around the end of November to around the end of December, this is the main venue for the Christmas markets.

There are three fountains on the square, the largest of which is Bernini’s “Fontana dei Quattro Fiumi” (Fountain of the Four Rivers) which was erected in 1651 (youthful by Roman standards!)

The four statues on the four corners of the fountain represent the most important rivers of the continents where Christianity had spread. These are the Nile, the Danube, the Ganges and the Rio de la Plata. It is very impressive, we thought it was the Trevi Fountain at first but actually the Trevi is just a short walk from here.

Tip: Wait until it’s dark to visit the Trevi Fountain because it is then that it is most impressive. It is beautifully illuminated at night. Be warned though that when you sit down at the edge of the fountain to get a photo, people will offer to take the photo for you and will try to charge for this you even if they use your camera!

The vicinity of the Trevi is thronged with tourists and pickpockets too by all accounts so watch your belongings closely.

There there is a convivial atmosphere and there are lots of restaurants and bars close by so it is well worth a visit to the area after dark. From here you can easily take in 2 other famous Roman landmarks on foot: the famous Spanish Steps (the steps which take you up to the Trinità dei Monti church at the top) and the Pantheon (formerly a Roman Temple, now a Church).

We didn’t linger aroun them for too long but it was good to tick them off the list.

We spent the entire day in the Vatican Museums: 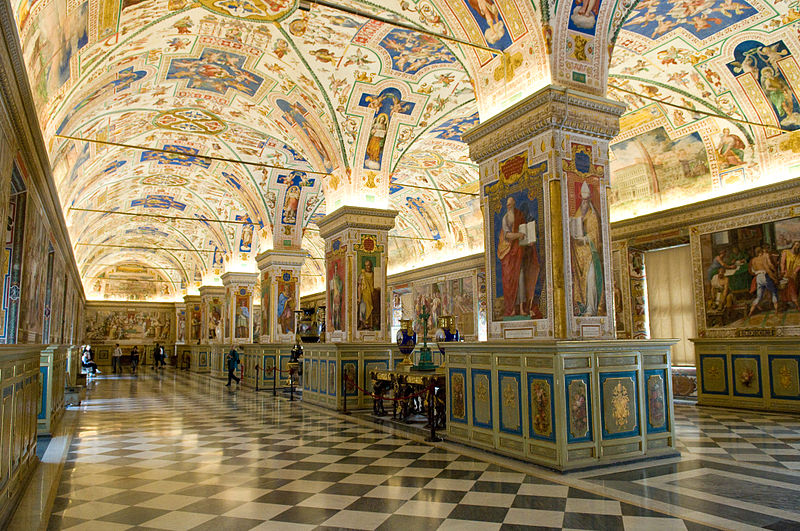 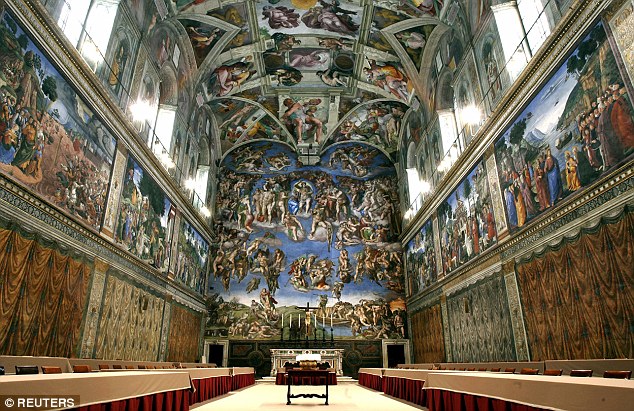 Again we used the sightseeing bus to get there so we really got our money’s worth out. Even though we went in November and we thought it would not be too busy, we were amazed at the length of the queue to get in. It snaked around the block and looked hours long.

However glad I was of the Skip-the-Line tickets at the Colosseum, I was twice as glad of them here, as we were inside in about 15 minutes. Again, we added on the services of a guide locally (€8 for both the Vatican Museums and the Sistine Chapel) and I was glad we did this as it really brought the experience to life. This is a day where you will do a lot of walking as the Vatican museums and St. Peter's Basilica are cavernous and the Sistine Chapel takes time to get through.

Tip: Bring comfortable walking shoes on this trip. They are essential for seeing the Vatican as you will be doing a lot of walking. Pavements in general in Rome are cobbled and uneven in many cases - it would not be an easy city to negotiate if you have walking difficulties or if you are wheeling a buggy. Also bring a rain jacket especially if you are travelling there during the winter months as it can be showery.

When we had finished here, we went to the Swiss Guard's office to get tickets to the audience with the pope the following morning. The place in the photo below is to the right of the main entrance to St. Peter's Square. You go in through these bronze doors to the ticket booth on the left: 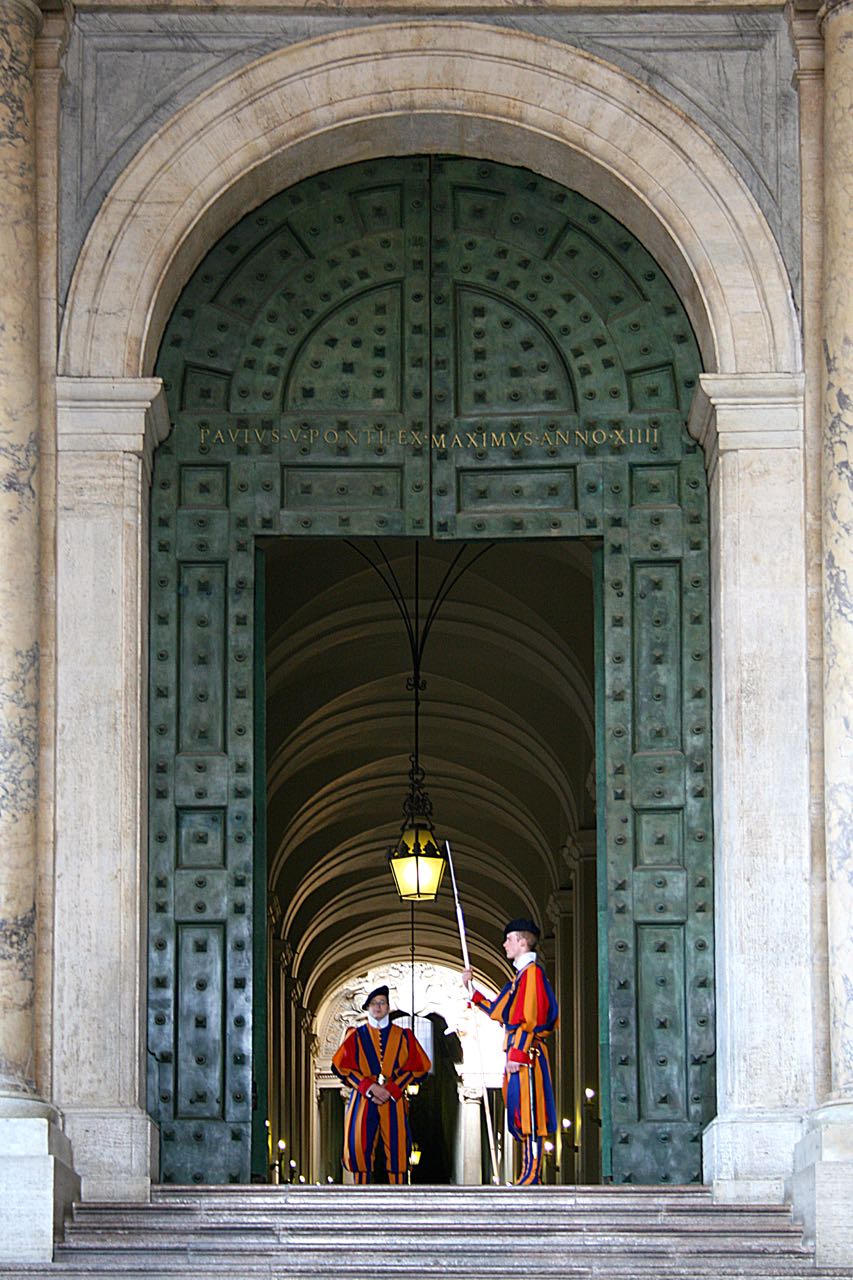 The papal audience only takes place on Wednesdays when the pope is in Rome and you can only get tickets the day before (unless you pre-book them in advance by faxing the Vatican). The pope also makes a public appearance at a window in St. Peter’s Square on Sunday mornings to say the Angelus and give a blessing. Both events are free.

Our last day in Rome dawned bright and sunny which was great as we were in a queue to get into St. Peter’s Square from 7am. It was worth getting up this early as we were not far from the start of the queue and we knew we would at least get seated. More importantly, we knew there was a good chance we would get seated near the front.

The gates opened at 7:30am and we were allowed inside to take a seat. We were only 2 rows back from the front so that when the pope arrived in his pope-mobile shortly before 10am, we were only about 6 feet from him! 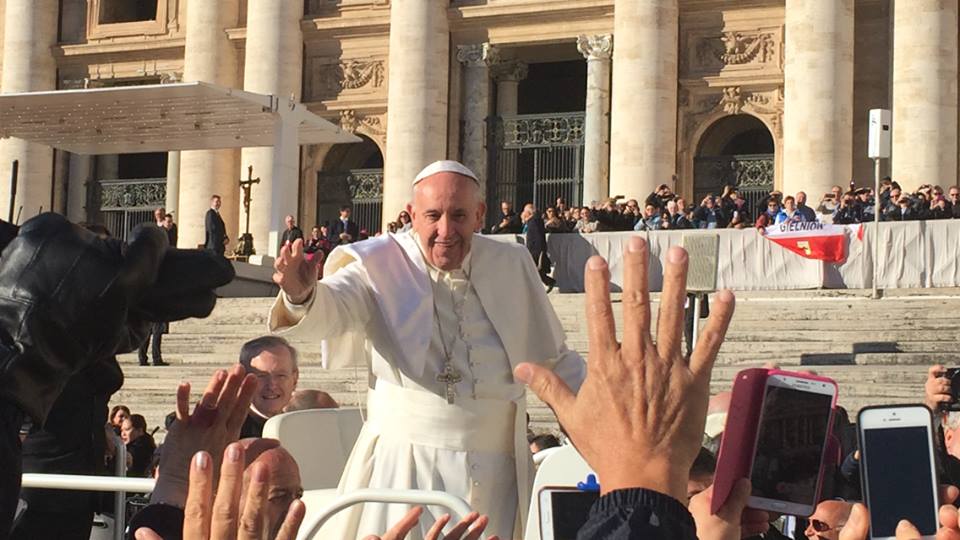 It was a wonderful experience and the atmosphere was electric!! It was definitely the highlight of our time in beautiful Rome and a fabulous finale to our time there!